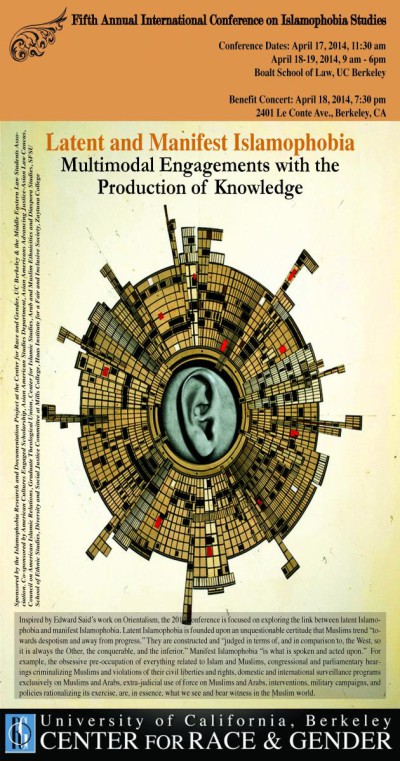 PAPER PRESENTED BY HOURIA BOUTELDJA AT THE FIFTH INTERNATIONAL CONFERENCE ON ISLAMOPHOBIA AT BERKELEY (APRIL 17TH, 2014).

First, I would like to thank the conference organizers for inviting me. I want to pay tribute to their efforts for putting together this high-quality conference. As is the case every year, I will speak on behalf of the Party of the Republic’s Indigenous People (Parti des Indigènes de la République or PIR). This time, however, I will also speak on behalf of Mothers All Equal (Mamans Toutes Égales), a collective to which the PIR belongs and that struggles for the repeal of an administrative text that bans mothers who wear the veil from participating in school outings. If I take on the role of representative here today, it is to raise awareness and denounce such unfair discrimination against these women and their children.

By way of introduction, I would like to start by saying that the situation in France and in Europe is quite worrisome. The economic crisis magnifying the situation, we observe, across the continent, the problematic rise of far-right, fascist and neo-Nazi forces. These radical nationalisms are increasingly uninhibited. Some of them take part, democratically, in different elections and quietly become institutionalized. The National Front is the third political power in France, and its president is a woman with a steel grip who does not hide her ambitions for the country’s presidency. To reach this objective, she will stop at nothing to make her party appear respectable and she is admirably successful. Admittedly, her task is facilitated by a number of circumstances. For instance, Islamophobia — and more exactly a State-supported anti-Muslim type of racism — is a national sport in France. The white political field that goes from the extreme right to the extreme left is completely contaminated. However, we must be precise in our analyses. Let me unpack some of this.

Institutional Islamophobia is not a product of the extreme right. It is a product of social democracy represented first and foremost by the institutional left (i.e., the Socialist Party) and the Republican right. One of the intellectual symbols of this social democracy is Alain Finkielkraut, a philosopher who was recently admitted to the French Academy. In fact, we can interpret his nomination as an award given to him by the country for his services. He is indeed a very well known Islamophobe, one of the worst neo-conservatives of the past decade. And he is also a notorious Zionist. France knows how to recognize its great men. Finkielkraut, who was elected to take the seat of Félicien Marceau, will have to deliver a speech in praise of Marceau. One has to know that Marceau became famous for his anti-Semitic and pro-Nazi activities. In 1946, the Brussels War Council sentenced him in absentia for these activities. Marceau was condemned to 15 years of hard labor and deprived of his nationality. I am impatient to hear Finkielkraut’s speech…

It is thus under the administration of the Republican right that the Islamophobic law of 2004 was adopted with the support of the institutional left. Also note that the left of the left, which is sometimes institutionalized (as is the case with the Communist Party) and sometimes not, and which is clearly anticlerical, colonial and Eurocentric, participated extensively to the Islamophobic climate and, by and large, supported the 2004 law. Sometimes when it did not openly support it, it did not fight it either, and the few exceptions to this confirm the rule. In addition, apart from a small minority which includes the Antifascist Action Group (AFA), the Paris-Suburb Antifascist Collective and the libertarians who fought Islamophobia1 (and generated fierce debates in the libertarian community), a large part of the most radical and most antifascist fringe of the French left continues to suspect Muslims and veiled women, and continues to repeat the mantra “neither God nor Master.” This old slogan may have been relevant in the past when the Church was in power but is ridiculous today when we know that Islam is not a state-sponsored religion and is rather the religion of the new proletariat, the subordinate classes, and the poorest of the poor who antifascists claim to defend.

Last June, far-right groups took part in a series of aggressions against veiled women in the suburbs of Paris, and this resulted in very few reactions. Only women were targeted and one of them even lost her baby. Antifascists did not react much and neither did the feminists, if we exclude a small minority of them. Around the same time, a young white antifascist man, Clément Méric, was attacked and killed by the same ultra right-wing circles. There, the reaction was immediate and the emotion was such that the affair rapidly gained national attention. Of course, we were dealing with a murder. I am not here questioning the legitimacy of the rage that gripped antifascist circles. But we observe that left-wing circles, antifascists and antiracists strongly mobilized to protest against the murder of Clément Méric in all large French cities but were terribly absent from the demonstrations organized by Muslims. It is a bitter matter of fact but it is not new. I offer some explanations to better understand why this is so2:

It is possible to overcome these contradictions because it is obvious that fascism is the enemy of post-colonial people, Muslims as well as the white and non-white working classes. For this to happen, it is necessary to render coherent antifascism and anti-colonialism, antifascism and antiracism. But all this will remain theoretical if antifascism is not decolonized. It is urgent for antifascists to update, that is to say, to face their whiteness (i.e., their racial privileges). Indeed, as long as they focus all their energy against the ultra-right, they will neglect two priority issues: (a) the transformation of the left; and (b) alliances with those who bear the brunt of racism and are the preferred targets of fascism. Worse, they will be complicit in fascism even if they claim otherwise from their radical facade. However, if we tell them “today, you will have to consider alliances with bearded men, veiled women, and maybe even with mosques,” they will have a heart attack. We are obviously very aware of this. This is why we think that alliances are built under pressure and within power relationships. This means that we must create our own political existence and imagine our allies. As the great Algerian sociologist Abdelmalek Sayyad has said: to exist is to exist politically.

I would like to conclude with a wish. Last year, this conference issued a declaration denouncing the rise of Islamophobia in France. This declaration was followed by an international conference in Paris in December 2013, which was a huge success. I sincerely hope that a similar event will be organized again and that we find in France the means of doing so. I would like to point out that the conference has had a beneficial impact in Europe since British, Dutch, Belgian and German organizations have expressed the desire to follow the French example and hold political rallies of the same type and at the same period. Finally, I cannot thank enough Hatem Bazian and Ramon Grosfoguel, who are present here, for their dedication and commitment. I hope with all my heart that this collaboration between Berkeley and French antiracist circles will continue and grow. Thank you.

Paper presented by Houria Bouteldja at the fifth international conference on Islamophobia at Berkeley (April 17th, 2014).

Translated from French by Geneviève Rail.

1 Libertarians and free of concessions against Islamophobia! Available in French at: http://www.bboykonsian.com/Libertaires-et-sans-concessions-contre-l-islamophobie-_a2635.html

2 This analysis is inspired by Félix Ewanjé-Épée and Stella Magliani-Belkacem’s intervention entitled: “What antiracism for what antifascism?” 6th Inter-departmental Colloquium for a future without fascism, 19 January 2013, Voiron, France (initiated by the organization Ras L’Front Isère).

3 Article written by Messali Hadj, following the dissolution of the North African Star. Published in La Gauche Révolutionnaire, No. 15, 1 March 1937. Available in French at: http://indigenes-republique.fr/58208/

4 The claim of public freedoms in the political discourse of Algerian nationalism and French anti-colonialism (1919-1954), El Ouma journal, September-October 1936. Available in French at: http://insaniyat.revues.org/6387