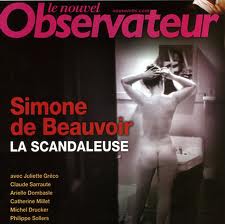 How to explain to you White people that I have no other choice? I am at a crossroads and the wind is pushing me toward my people. I must be in solidarity with men. How do I explain this to white women? And to feminists in particular? The women who fought for the recognition that separation and non-mixing are necessary for feminism to blossom as a political project?

I am a woman. Not just any woman. And I don’t owe solidarity to just any men. I am an indigenous person and I offer my solidarity to men who share that condition. Those from my community. And if I didn’t offer it, it would catch up with me and force itself on me whether I wanted it or not.

Maybe the Dominique Strauss-Kahn (DSK) affair will help me explain? But before we get there, a teenage memory. A TV movie: Pierre and Djemila. He, handsome, loving, attentive. White. She, beautiful, in love, terrorized by her family. Arab. This film was intended for me, the daughter of an immigrant. It spoke to me. It told me how much my family was detestable and how much French society respected me. A film that turned me away from my people and made me forget that my father – male, of course – was also an Algerian worker (zoufri), an exploited person who worked hard so that we could survive, and that my mother was an immigrant’s wife who worked hard to raise us. The film explained to me, their daughter, that they treated me badly and that there was only one way out: I had to get away from them.

At the beginning, I believed this old refrain that follows you everywhere, gets into every pore and gets embedded in your skin. And then I began to doubt and, in the end, didn’t go there. But I could have, like so many other girls. No doubt my teenaged self had benefited from the experiences of my older sisters who (often) ran up against the mirage of the white prince charming, an escapade that cost them no small thing: a break with their family, a stigma against their mothers who had raised their daughters badly, the shame that spreads over everyone and also the blame and, most important, a bad reputation…

How many young women committed suicide, stuck in the middle of the battle between the two patriarchies? The white, conqueror and sure of himself, and the other, indigenous, dominated and under pressure. An escapade that conspired to make these young women accomplices, even foot soldiers, of the racist system, delivering the deathblow to the contemptible North African family. All this barely two or three decades after Algerian independence. The old formula hasn’t gathered any dust. Didn’t it reach its high point in the flamboyant success of Ni Putes Ni Soumises?

So what’s the connection with DSK?

There is one. It’s the connection between the French elites and their attitude toward the sexism of the rich and powerful of France, the sexism of the middle class and the sexism of the bottom. This haughty France didn’t hesitate to publish the naked photograph of Simone de Beauvoir on the cover of a major magazine to celebrate the centenary of her birth. Could we imagine a buck-naked Sartre gracing the cover of an important journal? This is surely expression of a particularly French sensibility. Artistic. Esthetic. Who better than the French elite to see and feel what made the “woman” behind the “feminist?”

A self-satisfied elite, one that gives lessons, walking 10 centimetres above the ground and obstinately indifferent to a reality that is mistreated and spurned in favour of a self-satisfaction that has no limits. And this is perfectly visible when it comes to women. From where I sit, I see three specific and distinct sets of behaviour:

–       Complete indifference to white patriarchy that structures French society and determines the lives of millions of women. And yet all evidence points to a worsening situation for French women: 75,000 rapes per year (according to a 2007-8 study on victimization, lifestyle and safety conducted by the ONDRP and the INSEE), a wage gap between women and men of between 13% and 30%, the fact that France dropped to 18th among European countries when it comes to the employment rate for women. And then there’s the gap between retirement pensions and the display and exploitation of women’s bodies by advertisers. Sexism and violence by your average white man against your average white woman elicits, at best, timid protestations and, at worst, general indifference.

–       A unanimous and unforgiving denunciation of violence against women in low-income, immigrant neighbourhoods (“banlieues,” or suburbs, in the French context) if the perpetrator and victim are both black or Arab. It is important to note that the sexism of the guys from these neighbourhoods is more than simple sexism; it is decontextualized and ahistorical barbarism. In this case, the phallocratic white man discovers he’s a feminist. There are no words too hard to crucify the Arab or black boy and no compassion strong enough to sweep in and save the “beurette” (young woman identified as Arab or North African). From Chirac to Hollande, de Villepin to Dray, from CNDF feminists (National Collective for the Rights of Women) to Elisabeth Badinter, from Arlette Laguiller to Nicole Guedj, from TF1 to Canal Plus, the white world has tremulously shared its condemnation countless times of the nasty male from the departments and territories on the periphery of the central city (“DOP TOP,” a play on DOM TOM, the acronym used for the former offshore French colonies that are now departments or territories of France). I can’t resist evoking here the vivid homage paid by Chirac to Fadéla Amara’s mother for having, and I quote, “given life” to this star of the dignity of woman.

–       A virtually unanimous class solidarity in support of DSK that offered up the most extravagant of extenuated circumstances. An elite that becomes one with him, euphemizing rape, purposely confusing rape with debauchery, showing no compassion for the victim, scorn for the idea of her consent. Sexual harassment? A type of seduction proper to France that the victim couldn’t have understood (because you have to be French to decipher it). “This is how the Dreyfus affair started!” Shouts from Jean-Pierre Chevènement. Curtain.

So what should the immigrant’s daughter make of this spectacle?

That depends how I situate myself. As a woman, I can only be hurt and deeply concerned about the behaviour of the majority of the white feminist “sisters.” How could those who are best placed to know intimately and from experience that the French elites could care less about the interests of women have joined in a sacred union against the guy from the banlieue? Was a spell cast on them? I’m not that gullible. The truth is that, caught among competing interests, they privileged race solidarity. Like Le Pen, they prefer their own family to their neighbour…

As an indigenous person, I’ve known since Pierre and Djemila, that very few people want what’s best for me. I am someone to exploit, an instrument of white vanity. This hypocrites’ ball does have a virtue. It forces me to return to reality and to resituate myself. It demands my lucidity. I chase away the myths and dissipate the fog. I look at my parents, I look at my brother, I look at the girls from my neighbourhood, the boys in my circle, I look at Jean-François Kahn, I look at Dominique Strauss-Kahn, I look at Anne Sinclair. And then I see my mother again, I see my father again, and I see my brother again. They have done everything to distance me from them. And I come back to them. Inexorably.

I know today that my place is there. More than an instinct, it’s a political approach. But before becoming a conscious fact, this return happened as a collective wish for survival and resistance, of which my consciousness is the product. Our collective “me” reacted in creating its own immune system. What happens to Djemila when, the romance over, she is dumped by Pierre, who takes off for greener pastures? And what about her financial independence? What happens to the indigenous woman, isolated and vulnerable in a hostile society that discriminates against her while it exoticizes and instrumentalizes her? Will she find refuge in her community after her “betrayal?” Maybe yes, maybe no. And why take the risk? That’s the question that indigenous women of modest means – in other words, the majority of us – inevitably have to ask ourselves. A friend of mine told me, “I’ve never been a feminist. I never even considered it. For me, feminism is like chocolate.” How right she is. To reproach us for not being feminists is like blaming a poor person for not eating caviar. For what room to we have to maneuver between dominant white patriarchy and “our” patriarchy, indigenous and dominated? How to act when the survival strategy of the latter consists of exposing his pecs and displaying his virility? This is the equation that the collective “me” of women has had to solve. A me that has discovered the difficult compromise between integrity, the protection of the group and the liberation of the individual. A compromise between indigenous men and women. In this fight, women have not been passive. They played their part with the means at their disposal. The hijab is one of the expressions of this compromise (but by far not the only one). Beyond its spiritual significance – collective or specific to each woman – and its religious dimension, the hijab must also be understood as the product of a negotiation between men and women in which the post-colonial context plays a major role. The scarf sends a clear message to white society: “1. We are not bodies available for white male consumption. 2. We are not bodies available for exploitation by the society of the spectacle.” It also sends a clear message to indigenous society: “We belong to this community and we are showing our loyalty to it.” Is it a paradox to seek a collective blessing? A stab in feminism’s back? No. It is the necessary condition for concrete emancipation because it’s either that or a perpetual split, the no man’s land of the disembodied beurette. From now on, there will surely be longer studies, later marriages, planned pregnancies, a reappropriation of religious texts to make more egalitarian interpretations, more political and community involvement… Contrary to appearances, non-veiled women (of which I am one) often adopt the same strategies: compromise, negotiation, tradeoffs. A superficial reading of social phenomena might leave the impression of a fundamental difference between the “veiled” and the “non-veiled.” One group is anchored in modernity and the others turn their back on it. That’s wrong. We all live in the same space-time and face the same contradictions (with more or less violence). In fact, we are all fighting. To breathe. To reconcile ourselves with ourselves. In other words, to gain the most (in independence and freedom) and lose the least (by maintaining our family ties). A tactical choice born of a consciousness of the fragile equilibrium and the experience of suffering. In this context, the idea of feminism as chocolate makes complete sense: the indigenous man is not the main enemy. The radical critique of indigenous patriarchy is a luxury. If we are ever to take feminism upon ourselves, its development will have to follow the steep and winding paths of a paradoxical feminism that necessarily involves an allegiance to our community. A decolonial feminism. A countercurrent of white feminism.

Here’s another memory. A text from a friend when she married a man from her community: “Free at last!”

Translated from French by Karen Wirsig.