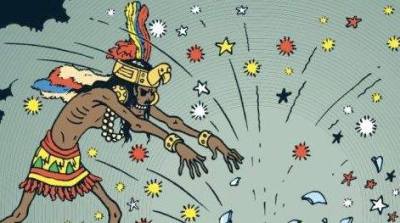 “We will have to put together the collabos’ dossiers, those of Charlie’s assassins. I will name them: they are the Indivisibles of Mrs Rokhaya Diallo who awarded the Y’a Bon Awards to Charlie Hebdo, I got it, Luc Ferry got it too, Christophe Barbier, many people, Finkielkraut, they are the Indigenous People of the Republic (PIR), there is the Nekfeu rapper who wanted to do a ‘burning by fire for these Charlie Hebdo sons of bitches,’ Guy Bedos, who we have known to be better inspired. It will require a systematic and historical report on all those who have ideologically justified the death of the twelve Charlie Hebdo journalists.” Pascal Bruckner, January 15, 2015 (28 minutes on Arte).

“What bothers us, it’s not to live with bodyguards and death threats,” it’s the other attacks, “from people who call you Islamophobic while you are anti-racist and you are fighting for freedom. The most painful are these pernicious attacks that can arm a Kalashnikov!” Caroline Fourest, January 8, 2015 (Special Envoy speaking on France 2).

I despise these people. I would almost agree that they have the right to be racist, if indeed they would assume it as does the National Front (FN). But they are too cowardly for that. I despise them because they love war and claim to love peace. They justify the West and its crimes and wear the mask of noble souls. They trample millions of corpses and lives pulverized through Civilization while they stage, lewd and obscene as they are, their feigned anger and overplayed grief. Objectively, they are the links of this infernal chain at the end of which are the Kouachi brothers. Do they know about their responsibility in the death of their fellow travelers? Regardless, they unsheathe. The culprits? The “Islamo-leftists”! I despise them because they are spineless. So small, you need a magnifying glass to see them. Irresponsible individuals already in the dustbin of history. Let’s move on.

I am over fourty years of age. During my whole indigenous life, I have never heard anyone insult our prophet. My whole life, I swear. It is neither prohibited nor taboo. This thought does not cross our minds. This thought does not exist, period. It is a relationship with the sacred that assembles the consent of more than one billion souls, including atheists, agnostics, and “free thinkers.” This happens even though a thousand contradictions traverse the Ummah and our divisions are innumerable. Historically, we did not know this radical separation of church and State, as we did not know this type of distinction between the sacred and the profane, the public sphere and the private sphere, faith and reason [1]. It took the advent of Western capitalist modernity and its outrageous and arrogant narcissism to universalize historical processes (i.e., secularism, the Enlightenment, Cartesianism) that were geographically and historically located in Western Europe. This is a specificity that became universal through self-declaration and the power of arms and bayonets. As for other specificities that are not worthy enough to enter history, either they abdicate or they are barbarian. But it seems that, with the father figure of the prophet, French coloniality stumbled upon a bone. When Charlie Hebdo published the caricatures, some of which being racist and others obscene, I was shocked at first. I said to myself, “They will not spare us.” Racism in all its forms: contempt, paternalism, Orientalism. Discrimination in all its forms: railway sidings, police crimes, racial profiling, untimely death of our parents because of working conditions, criminalization of our struggles, clientelism, jail… Hogra (contempt) again and again. But then, a line was crossed. It was not mere insults or violence to a person. It was sacrilege. At that moment, I thought of “Tintin and the Seven Crystal Balls.” Back from South America, one after the other, the seven members of an expedition devoted to the Incas are victims of a curse and plunged into a profound lethargy. During their excavations, the researchers desecrated the grave and defiled ancestral beliefs. The revenge of the Incas came soon after. That’s where the cold rationality of the Enlightenment leads us: to the fanaticism of market and capitalist reason. This is why, after the initial shock, what took precedent was not so much the shock but the fear. The PIR immediately responded. [2] We wrote these lines that resound loudly in my head today: “Many French people who do not necessarily share the political orientation of Charlie Hebdo will doubtless appreciate this charge against Islam in the name of a tradition rooted in anticlericalism that equates all religions to an archaism opposed to modernity and emancipation. This approach, which at particular times and circumstances could be justified, has been accompanied by growing hostility to the sacred, giving room to a meaningless and strictly instrumental rationality that is contemptuous of any form of transcendence. This mindset also leads to the stigmatization of some of the white working classes viewed with disdain for their commitment to their beliefs; stigmatization on the part of many, including political currents that claim to defend the most disadvantaged populations. The crisis is not only economic. It is also a cultural and spiritual crisis. On the eve of the presidential elections, those who would like their social transformation project to resonate should ponder this. As for us, we will continue to fight against Islamophobia and for the equal rights of Muslims and to defend the space of the sacred.”

I underline the last sentence because we were blamed for it at the time: “defend the space of the sacred.” Some of our white allies, all sincerely mobilized against the racist caricatures of the prophet, believed they were detecting a concession to a form of bigotry or even a form of demagoguery to please our supposed social base. Crass stupidity. It took an attack of terrifying determination, the brutal death of twenty people, to understand the materiality and political dimension of the defiled sacred. Not the sacred of the dominant—the flag, the national anthem (highly protected and only subject to one-way criticism within particular power relations)—but the sacred of the “wretched of the earth.” It did not take a genius to guess that this system produces time bombs—and our friends knew it—but it had to be us to understand the gaping wound of our violated dignity. We know that we are nothing. People keep telling us. Our humanity is trampled; on it, everyone wipes his or her feet. One of the few figures which rehabilitates us and on which we project our positive and worthy “we” is that of the prophet. He allows us to go on standing on our own feet, as he is justice, righteousness and goodness. He is our positive reflection. What we see is the inverted mirror image of our tortured past, the history books, TF1, Marianne, Onfray, the CRIF or the UMP. Even our humor is turned against ourselves. Don’t we say: “the Arabs invented the zero and stayed in it?” When, first, we are killed socially (“you’re the scum who deserve the power hose”), and then we are finished symbolically (e.g., the caricatures of the prophet), believe me, you have to fear the worst. Yes, I was scared. Thus, the “jihadists” responded: “our lives are worth nothing but now yours are worth nothing as well. You eradicate us, we eradicate you.” This is the curse of the “scum.” Let’s move on.

Last September, a PIR activist, Aya Ramadan, was invited by the Communist Party of Bobigny on the occasion of the celebration of the Huma. The CP had not recovered from its defeat in local elections at the hands of the IDU. Aya had produced an analysis [3] that troubled certainties and she explained why many indigenous people had swung to the right. Not surprisingly, the debate was disappointing. The disconnect between the Left and les quartiers could only be explained, according to the Bobigny CP, as a form of ingratitude on the part of the youth. I then took the opportunity to speak, hammering the idea that the divorce was consumed and that people should note. I added this: “We no longer trust you. Our confidence will only be restored when you decide once and for all that Muslims and suburb residents are part of your people. We will judge you after the next terrorist attack. It will certainly result in many deaths and will be committed by ‘Muslims’ or rather by French individuals overly integrated into the criminal and imperialist machine. It will be a test. We will know then if you have the courage to be on our side, the side of those millions of ‘Muslims’ who will be held hostage between terrorists and good republican consciousness. You will then be with us or against us.” No prophecy in these words but simple lucidity. The Kouachi brothers and Amedi Koulibaly were preceded by Khaled Kelkal Mohamed Merah and Mehdi Nemmouche, all ‘Muslims,’ all indigenous people. The source of their murderous madness will only dry up when, on the outside, imperialist wars cease, and inside, racial divides disappear. On the 11th of January 2015, the Communist Party “was Charlie.” With national fervor, it communed with NATO, Israel, and leaders of liberal and imperialist Europe. “With our own words of order,” it apologetically added. But on the 11th of September 2001, the CP was already American. From the vote of full powers in 1956 [4] to the famous “we are all Americans” and to the “I am Charlie,” there is a family resemblance. Let’s move on.

Today, I hold a grudge against “our friends” who look at our finger when we show the moon, who mock our word when it is a warning. I hold a grudge against Charlie Hebdo for making all of us carry the heavy burden of its inconsistency. I blame them for having missed the essential part, probably the only thing that matters: we are human, not doormats. I blame them for having stripped satire of its meaning, for directing it against the oppressed (which is a form of sadism) instead of against power and the powerful (which is a form of resistance). “Charb led his editorial staff to death” [5]. These are not my words. They are those of Delfeil de Ton. I blame them for not having listened to these damn “Islamo-leftists.” I resent them for if they had heard us, perhaps we could have saved them from themselves, and maybe they would still be with us.

“Maybe,” because only God knows.

Houria Bouteldja, member of the PIR

Translated from french by Geneviève Rail.

[1] “I like to recall, here, that in the spirit of Marx, the accomplished form of communism—and therefore human emancipation as he imagined it—involved the re-association of social bodies (economic, political, cultural…) separated as much as possible from Capital.” Sadri Khiari, Sainte Caroline contre Tariq Ramadan (St. Caroline against Tariq Ramadan), p. 69