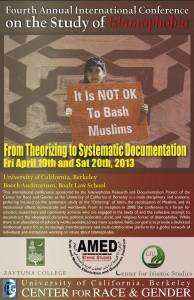 Thank you for inviting me. It’s a pleasure for me to be here, to participate and to contribute to this conference. And I wish this meeting to be a new step to understand what islamophobia means and to give us more efficient tools to fight it. So let’s start!

For the last ten years, Islamophobia has increased in an incredible way all over the world. Every year, the Annual International Conference on Islamophobia at UC-Berkeley confirms it. France is one of the countries in the world where racism against Muslims has increased the most. In the name of secularism, women’s rights, the defense of Republican values, and the struggle against terrorism, Islamophobic discourses affect all spheres of the French society. The war against the “Axis of evil” produces Islamophobia on an international scale that refracts onto French politics and public debate.

The right and extreme right practice islamophobia for sure but so does the institutional left, represented by the Socialist Party. The extreme left is also not immune. Let’s not forget that the ban on the veil was supported, even carried, by large parts of the extreme left during the 2000s.

I don’t believe it makes sense to characterize Islamophobia as a “feeling.” The terms “representation” and “imaginary” are often used, even as Islamophobia is institutionalized. In fact, there are Islamophobic laws.

The 2004 law, for example, is a law against young women who wear the headscarf, a law that transformed – I would even say betrayed – the secular spirit of the 1905 law. Secularity means neutrality of the state: the state is without religion, neutral, and therefore neither atheist nor agnostic. With the 2004 law, the state’s duty of neutrality becomes the duty of the citizen.

We shall remember that on July 22, 2012, the United Nations’ Human Rights Commission condemned the French state for violation of religious freedom.

The 2012 Annual Report of the United Nations’ Human Rights Commission has confirmed the increasing number of anti-Muslim aggressions in France within a context of state racism. Women are the main target of these aggressions. According to the report of the Collectif Contre l’Islamophobie in France, the Islamophobic aggressions against Muslim women increased dramatically in 2012.

Recently, French state islamophobia manifested with a strong force once again. The recent controversy over the debate on Child Care female workers where a Superior Court cancelled the firing of a women day care worker using the veil or the case of the exclusion of a middle school student for using a bandana and having a “too long skirt,” confirm that the political issue at stake here is not to defend laicism or freedom of expression including “the right to criticize religion.” What is at stake today in France is the political will to marginalize any Islamic expression in the public sphere and to exclude populations that affirm its Muslim identity.

After the Nicolas Sarkozy administration, characterized by an incredible series of offenses against Muslim, Islamophobic state policies promises to multiply under the presidency of François Hollande: As a matter of fact, a bill proposal has been submitted to the National Assembly on January 16th to promote the principle of religious neutrality towards childcare workers and in childcare centers for pre-school aged children. Moreover, the President of the republic announced a law to guarantee laicism in the working environment and spaces.

While discrimination is still in place and sustained by the state, the collective called Mamans Toutes Egales continue to defend many mothers that use the veil and are excluded from chaperoning fieldtrips and After School Programs. Concretely speaking, it is the right of Muslim women using the veil to participate in public life, to work, to get involved in the schooling of their children that is being violated.

The French state discourse that the principles and values of the Republic are being threatened by the use of the veil and the religion of one of the most discriminated and poorest communities in France and Europe today sounds absolutely ridiculous. Despite this, the islamophobes present themselves as valiant resistors of islamicization without examining Islam in the French context. As matter of fact in France, Islam is above all the religion of the poor and of immigrants and therefore of a part of the population that has no political, economic or media power. They are attacking a population that cannot respond with the same force as those making the attacks.

To understand the rise of Islamophobia, it is necessary to analyze the current context. We are in a situation of global economic crisis and decline of the European identity in the face of emerging countries such as China, India, etc.

The white European identity that dominated the world for 500 years is in decline. The voices – often hysterical – raised in the media against Islam fundamentally express a fear of this decline. How to explain this irrational fear? Whites are losing their historical centrality, their Triple A rating so to speak, and they see all these non-Whites, wrongly identified with Islam, as a threat to their identity. After dominating for centuries, they are figuring out that, like them, others want to live, assert themselves and transform the order established by racism and colonialism, which necessarily signifies for them a loss of power and the privileges that come with it. Those who rightly fight this order to claim their rights and their full place, who fight discrimination, are thus seen as invaders.

Muslim resistance is perceived as terrifying, illegitimate and abusive even though what people are asking for in immigrant communities and popular neighbournoods is, above all, equality of treatment and of rights. While such demands do not seem outrageous to me, they clearly do for those who fight to preserve their status and privilege while exerting pressure to keep “the Muslims” in a subaltern position as indigènes. This conflict generates pockets of struggle and resistance and while we can’t foresee the outcome, we are right to fear the worst. Our only hope is that the victims of state racism organize themselves quickly to bring about a true political alternative.

That’s why I would like to take the opportunity of this conference to make a call for two things :

– The seconde thing : I propose to organise if possible in december an international conference just like this one in Paris with the support of Berkeley university and I invite you to come to Paris and participate in order to help the muslim community in France and all the antiracists mouvements to break the french political consensus on islamophobia.

Thank you for your attention.